What is brain tumour surgery?

The term “brain tumour surgery” refers to various medical procedures that involve repairing structural problems in the brain. There are numerous types of brain surgery. The type used is based on the area of the brain and the condition being treated. Advances in medical technology have enabled surgeons to operate on portions of the brain without a single incision in or near the head. Brain surgery is a critical and complicated process. The type of brain surgery done depends on the condition being treated. For example, a brain aneurysm can be repaired using a catheter that’s introduced into an artery in the groin. If the aneurysm has ruptured, an open surgery called craniotomy may be used. Surgeons, while being as careful and thorough as possible, treat each surgery on a case-by-case basis.

In this type of brain surgery, small brain tissue is removed from brain for examination. A small incision is made in the skull to remove tissue. 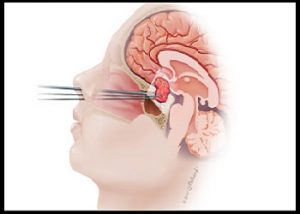 3. Deep Brain Stimulation
In this surgery similar to biopsy, a small hole is made into the skull. The surgeon inserts a small electrode into the brain. The electrode is connected to a battery at the chest. So that electrical signals are transmitted to determine symptoms of disorders. It is mainly used to detect the symtoms of Parkinson’s disease.

What is success rate of brain tumour surgery?

It is observed that in brain tumour surgery, 35 out of 100 are survived.

Are all brain tumours deadly?

Who is most at risk for a brain tumour?

Have You Scheduled Your Visit